“He replied, “You of little faith, why are you so afraid?”

Then he got up and rebuked the winds and the waves,

and it was completely calm.”

It was 3 am and I had just drifted to sleep on my hard hospital cot with a thin sheet draped over my body. I had been up for close to 24 hours so at that point I would have happily slept on the floor. Just as I began to dream, I was awakened to bright hospital lights being turned on overhead and the nurse screaming, “Bill, Bill, Wake UP!”. My heart raced as I jumped up, wondering if I was dreaming. As I looked around the room, I realized I this was not a dream but, instead, what felt like a nightmare. My dad had just had an invasive, 8-hour surgery the day before and the nurses couldn’t get him to respond. I watched as they wheeled him away to run multiple tests on him.

I was left alone, in a bright, cold hospital room. The fear was so intense that it felt as though someone had a tight grip on my neck and was strangling me. I couldn’t breathe. The only words I could utter in that dark moment were, “Jesus, where are you?”. Immediately I turned and looked at a recliner that was sitting next to where my dad’s bed had been before they whisked him away. As I starred at that recliner, I heard the Lord say, “I’m right here. He is just sleeping. Let him rest.”

The tone in which Jesus spoke to me that night reminded me of how he spoke to the disciples on the boat when they encountered a storm. He reminded them to fear not and he spoke just a few words to usher in a spirit of peace. That same peace flooded over me and I sat back down on my cot. Moments later the nurses returned and reported that he was fine. He was, in fact, just sleeping.

The Lord has since used this unforgettable moment in the hospital to teach me about his peace that surpasses all understanding. Sometimes fear rushes in like a flood when we are in an emergency situation. But fear becomes even more dangerous when it creeps in our backdoor and we invite it to pull up a chair and stay for dinner.

It’s not a matter of “if” we will encounter fear but “when” we encounter it. When it arises, we must do exactly as the disciples did and turn to Jesus. Jesus taught me that night that he has given me the authority to release the fear in my heart and receive his favor. Luke 2:14 tells us there will be peace to men to whom his favor rests.

Any time fear knocks on the front door of our heart, we must refuse to answer, and instead release the fear and receive God’s favor over our life and circumstances.

P.S. This was a devotional I submitted for Compel Training through Proverbs 31 Ministries. It was not a winner but I felt my readers would be blessed by it here on the blog. If you want the #realtalk story of how I’ve overcome the rejection of not winning that contest year after year, read this post. 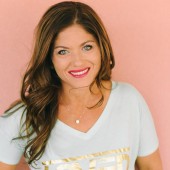 Rachael Gilbert is a former Oklahoman turned Texan by her husband, homeschooling momma of 3, business owner, coach, blogger, co-host of the Declare Conference & show host of Real Talk with Rachael. She loves Jesus and loves to cycle and go on outdoor adventures with her husband. She is passionate about seeing women walk in freedom in all areas of their lives! Nothing brings her more joy then calling the gold out of women and inspiring them to walk in their God-given destiny.

Why I’m taking a break from blogging

I Ran a Marathon!

This site uses Akismet to reduce spam. Learn how your comment data is processed.

Encouragement in a Box

I only send my subscribers the good stuff. In fact, a free guide to overcome fears & pursue God-given dreams is waiting for you!