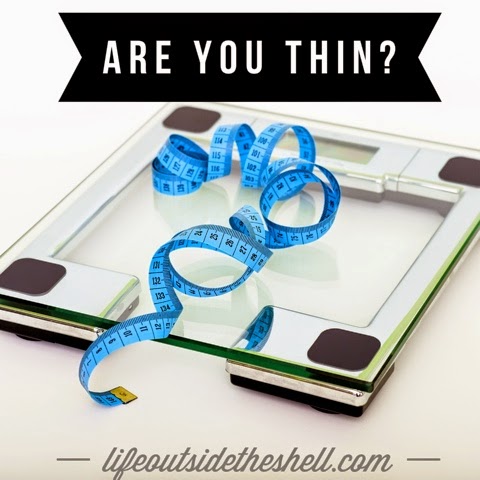 A few nights ago I was eating a bowl of Cheerios at 10:30pm(not the norm for me) and stumbled upon a documentary called  “Thin”.  I couldn’t help but watch it as it was a show following women with eating disorders through their time at a rehab facility for their eating disorder.  I was so moved that I began to write down quotes from some of them when they were in group counseling:

These were just a few of the many things they said but one of things I noticed was that these girls would literally cry and tremble as they ate something small.  They were terrified of gaining weight because to them being thin was all they had.  The saddest part was that these girls each finally got up to around 100 lbs at their stay at the facility but in the follow-up all had lost that weight again and one had passed away at the age of 33.  They used all kind of methods to lose weight: anorexia, bulimia, diet pills and over exercising.  They literally were willing to risk their own life for the sake of being thin.  But as you may have guessed, in their minds they were not thin.  In fact, many of them still viewed themselves as fat.

My heart is still hurting for these girls because, like many women, they did not know real love from their heavenly Father which is what lead them to go to such extremes for attention from others.

As I sat and ate my bowl of Cheerios and watched this documentary I couldn’t help but see the freedom the Lord has brought into my life.  If you are anything like me, you too can relate to the feelings of terror those girls felt about gaining weight.  The crazy thoughts of being willing to do whatever it takes to be “thin”.

I have been wanting to write an article on simple tips to lose weight but, to be honest, our society does not need another article written on how to lose weight.  Don’t get me wrong, as a group fitness instructor and chiropractor’s wife I am all for taking care of our bodies, eating healthy and exercising. But you don’t have to go searching for those articles, they simply come to you via Facebook, Google and standing in the check-out line.  Weight loss is everywhere.  So instead I am choosing to go somewhere very few are willing to go and share my own personal testimony of delivery from eating disorders and self-esteem issues(gulp).

I could write a book on my “life story of yoyo dieting” so in efforts to make this article a little shorter I want to simply highlight those moments:

Did you notice how the cycle ended for me?  I LET GOD IN.  I began to receive love from my Father God. If you remember one of the girls in the documentary said she doesn’t know how to love others so how could she love herself?  She brings up the heart of the matter of eating disorders….if you have never known the love of your heavenly Father you will believe the lie that you must earn love from people. I believe that the enemy begins attacking us women at a very young age in the area of self image.  He knows if he can get us to believe some root lies(like our worth is only in our appearance) than we will be forever in bondage.  You see, bondage in this area of overeating, undereating, binging, purging and self hate does not end on the scale in your bathroom.  It flows over into every area of your life.
The only way you can lose weight and keep it off is by letting Jesus into this area of your life.  I am not talking salvation but I am talking about allowing God to show you lies you have believed.  Allowing God to help you see food as health and wellness to your body rather than a bunch of calories that may make you gain weight.
Many people who know me now, and who did not know me when I was self-hating and abusing my body, think I am a health nut.  What they don’t realize is that I did not make myself that way but God did.  I did not flip the magic switch and all of the sudden crave vegetables and other healthy foods.  I did not flip a switch that keeps me from binging on Oreos and donuts.  No, that miracle was all God.
I’ve learned that the more time I spend with God the less I crave junk food.  Can I be honest and tell you I still have struggles today.  In fact, that bowl of Cheerios I mentioned at the beginning of this post?  They were an emotional eating thing after a long week of sickness in our family.  Do you know that if I don’t allow God into this area of my life daily that I too find myself dreaming of a box of donuts along with the crazy solution that will burn those calories off the next day?  It is a daily decision to allow God into this area of our lives.
Will you let Him in?  Will you ask Him these hard questions:
The weight loss secret is simple….allow God into this area.  As He downloads His love and truth into your life you will see changes in yourself that you could have never done in your own power.  Trust Him, he cares about all areas of your life and He wants to see you healthy and whole in your mind, soul, body and spirit.

I feel like someone needs to hear this today….you are loved right where you are and you are ENOUGH(no matter your shape or size)!! 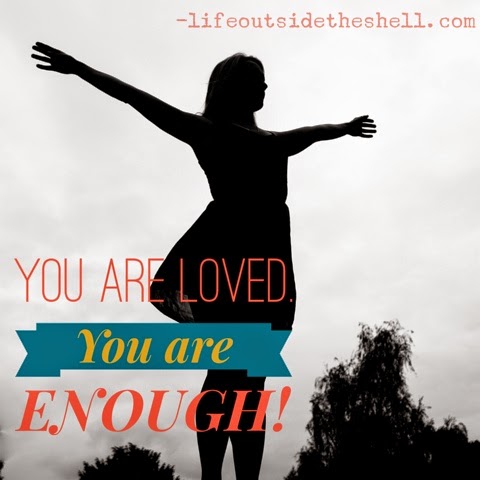