As I shared in this article God has really been speaking to me about allowing him into all areas of my life, including fitness.  I have been praying about the time of day to workout and recently God has been asking me to get up and do it at 5:30am.  Oh yes I argued but I obeyed and I have to say that God has been speaking so clearly to me in my early morning workouts and I am a happier mom and person throughout my days.

This morning as my alarm went off at 4:40am I told God all the reasons why today I just shouldn’t get up and exercise, surely he would understand?  I didn’t feel a peace about not getting up so I went anyway.  I went to crossfit and the moment I saw the WOD I wanted to back out of the room slowly…box jumps, my worst crossfit nightmare, were listed!  I can’t tell you why but I have a fear of jumping up on that box.  So my coach stacked up some weights next to it and told me to jump it, which I did just fine.  Then he told me to jump by it….I was clearing it by several inches.  The entire time I was thinking in my head “what is wrong with you?  You know you can jump that high, just jump onto the box!” But as soon as went to do it I chickened out.
As the workout was finishing up I looked down and realized I was wearing my new tank I had made that said “Power, Love, Self-Discipline”. It was then God reminded me that he did not give me this spirit of fear but instead he gave me power.  I walked up to the box and shifted the position in which I was standing.  Instead of standing at the wide part I went to the narrow part.  It was the exact same height but for some reason when I could only see the narrow place ahead I jumped it just fine.  But when I went back to only seeing the wide part it really messed with my mind.  From simply shifting my perspective and position I was able to conquer my fear. 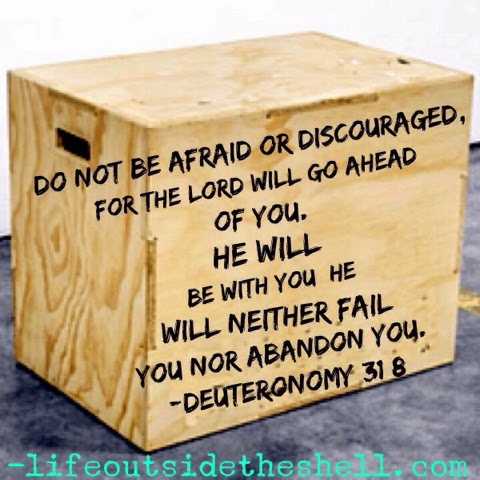 As I was leaving God spoke very clearly to me “there are things in your life that you are overwhelmed with because you are trying to look at too much at one time. You have everything within you to do what I have called you to do but you won’t jump.  Stop looking to the left and the right and just focus on the narrow path ahead. You can do this.”
I felt that was a word many people could use today.  You have what it takes, God has already planted the abilities within you to conquer what lies ahead…just take a leap of faith and jump!
Every step of obedience we take is followed by an opportunity for us to grow and hear the Lord. If I had not obeyed and gotten out of bed this morning I would not have had a revelation moment from God. Obey Him in the small things and He will entrust you with much!