What is your why?

Have you ever seen the movie “The Island”?  My husband and I were dumb wise enough to stay up until 3am a few nights ago watching it.  I should have just passed out when my head hit the pillow but instead I laid wide awake thinking about a statement that was made in the movie.

If you haven’t seen the movie here is a short description of it:

“A man goes on the run after he discovers that he is actually a “harvestable being”, and is being kept as a source of replacement parts, along with others, in a Utopian facility.”

To make a very long story short, two of these people were able to escape from a facility that was using them as insurance policies for the humans who had them made to look just like them.  The entire population had believed a lie that there was an uncontaminated “island” they would be going to when their number was drawn in the lottery.  Little did they know that the facility was keeping them as slaves only to slaughter them.

While it was a great movie the line that was stated by the man who escaped to the woman(who escaped with him) was something to the effect of  “We could set this ship sail(in reference to a sail boat) and be free but what about the others?”

So as you may have guessed they went back to try to set the other prisoners free and reveal the truth.

Why am I sharing with you a very condensed version of some movie I stayed up way too late to watch?  Because God began to speak to me about why I do what I do in sharing His word, hope and truth with other people.

I don’t know about you, but there are some days where I just want to crawl under a rock, or back inside my shell, and stay there.  It is so cozy there.  There are no demands on me, no deadlines, no critiques, no judgement, no rough patches and definitely no injuries.  Some days I wonder “why do I have this urge to inspire people?  To shed the truth of God’s word?  To lead people to Jesus? There are so many pastors doing this already why do I need to try to do it too? I’m not even in full-time ministry”.  You get the point…excuses and more excuses.

What God showed me through this movie was that while it would be so easy to set my ship sail and live in the freedom that God has given me it would be very selfish for me to not go back and rescue the others.  Even though I am not in ministry as a vocation we all get an opportunity to minister every single day.  Sometimes we miss it because it doesn’t look, feel and smell like traditional ministry, but it is.  In fact, those of us in the work force have a unique ministry that not many pastors have access to. 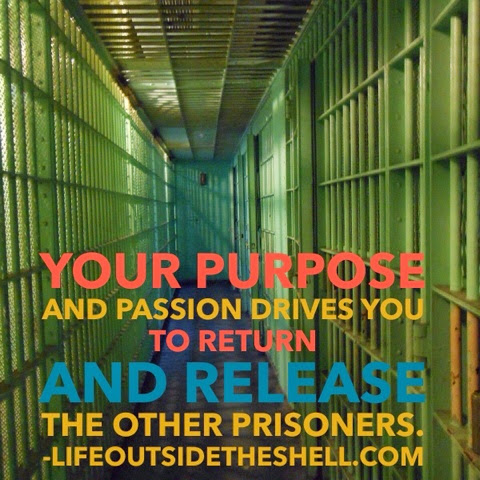 My questions to you today are:  why do you do what you do?  What drives you to inspire those around you?  What are you passionate about? What motivates you to live a life for God so people will be drawn to Jesus?

My “why” is because I can remember so clearly where I used to be and where I am now.  I would not be where I am today if it weren’t for the grace of our heavenly Father. He has given me compassion and love for people that only He can give.  I never want to lose my awe of what he has done in my life or I might stop going back to rescue the others.

Will you join me?  We don’t have to have it all together to make a difference, I know I sure don’t, but we do have to be willing to go and follow Jesus on the journey.  We must not let the fear of man hold us back from allowing the Lord to work through us and rescue His children.  Move forward in confidence, knowing the Lord goes before us and stands behind us.